skip to main | skip to sidebar

Moving on to Wordpress...

I realize it's been a LONG time since my last update on this blog...mainly because I've switched over to a new blog, "Do What You Love." Lots of the same information, but a little more focused on helping others find their true calling.

You can find it here.
Posted by Phillip No comments:

Great Article by the Networking King

Came across this great article by Keith Ferrazzi that I wanted to post up real quick. This is the same stuff that we stress with our Hob Nob chapter members all the time!!!

Why School Loans Suck Even More 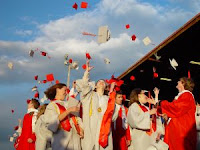 I came across this article from Businessweek about student loan debt, and started to think through a few things as a result. According to the article, the average college grad is 33 before their net earnings catch up to counterparts who never went to college. And get this: this data is for public university grads--meaning the age is older for those of us "lucky" enough to go to private institutions.

Without going off on too much of a rant, this is all the more reason to understand what you want to do with your life while you're still in college. If the statistics hold true, the average student changes their major nearly three times before they graduate college. In some cases, this results in more time than the standard 4 years at school...which means more money being spent staying IN school. Which basically means you're likely be nearly 40 by the time you pay off all your debt. And this doesn't even include graduate schools for professions like law or medicine (speaking of which, over 50% of general medical practitioners say they wouldn't be doctors if they had to do it all over again).

Consider this: Paul Allen, co-founder of Microsoft, dropped out of Washington State College after only two years. Michael Dell, founder of Dell Computers, never finished at the University of Texas. Barry Diller, CEO of IAC Interactive, dropped out of UCLA after only 3 weeks. And the list goes on and on with the likes of Mark Zuckerberg (Facebook), Bill Gates (Microsoft), and Steve Jobs (Apple).

...It strikes me that a lot of people who drop out of college early and go on to have wildly successful careers seem to be the ones that knew what they wanted to do and just went after it. So aside from saving a bunch of money, they saved a bunch of time and were able to hone in on what they were interested in much earlier than most of us.

Maybe all those dropouts were onto something...
Posted by Phillip 2 comments:

The Cover Letter That Mocks...Sheer Brilliance

Today I received an email from one of our Emory student leaders, and what I received was too funny NOT to blog about.

The concept: a book (called "Overqualified") composed entirely of cover letters to companies around the world...cover letters that mock the very companies that they're being written to.

I gotta say, if I ever want something to read on the toilet, this has got to be it--and I don't mean that as a slight. The letters are short, entertaining, and showcase something that we've felt like doing at one point or another in our careers when experiencing the frustration that comes with applying to scores of companies that never seem to respond. Or maybe that's just me. ;)

So, without further ado, you can click here and be entertained.

Posted by Phillip No comments:

The correlation between the economy and job applications

Part of what we do at Hob Nob is help recruit internship talent for organizations, and consult with employers on how to create great internship experiences. As a result, we get our fair share of applications from college students on a daily basis for the opportunities that we showcase within our campus chapters.

And you know what? I've noticed something.

With the state of the economy not exactly rosy at the moment, it's sending students into a flurry of activity...which is not exactly good in this case. Why? The flurry of activity is students applying to every internship opportunity that seems remotely viable, irrespective of their qualifications, interests, or talents.

Now, I can't exactly blame the students--after all, the prospect of landing a job are extremely hard in this environment. But this is precisely why I'd argue for the case that students, more than ever, must figure out ways to become "sharp."

Sharp is understanding your strengths and how to leverage them. Sharp is knowing your weaknesses, and finding ways to minimize them without pretending they don't exist. Sharp is articulating what makes you different than anyone else. Sharp is the opposite of being well-rounded. At the end of the day, being sharp means knowing what you are looking for and seeking opportunities that align best with what you bring to the table.

If you're a student trying to find an opportunity, I have just two words for you: Be Sharp. You'll gain better traction with the focus that comes from knowing what you want. It's not to say you don't have to apply to a lot of positions--I'm not disputing the fact that this environment is challenging and you might have to be more patient than ever in this job market. What I AM saying is that you will have a greater chance of being noticed through the noise if you find a way of differentiating yourself. And that usually means figuring out what makes you unique...and what makes you different.

In this climate where there is an "abundance" of talent looking to get plugged into careers, it's easier to be remembered for being unique in a sea of sameness.

Does Anyone Care About Microsoft Anymore?

Well, I just couldn't resist writing about this...reportedly Microsoft is releasing a new service called "Vine," which is described as a service that allows people to:

“Stay in touch with family and friends, be informed when someone you care about needs help. Get involved to create great neighborhoods, communities or causes. You select the people and places you care about most. Use alerts, reports and your personal dashboard to stay in touch, informed and involved.

“Information associated with the places you have chosen will appear on your map, including articles culled from 20,000 local and national news sources as well as public safety announcements from the United States National Oceanic and Atmospheric Administration (NOAA). Information associated with the people you care about who are in your Vine network will appear on the dashboard too. You will know when they send you an alert, post a report or update their Facebook status information.”

But I can't help but wonder if people would actually use this service. Hate to say it, but I think Twitter and Facebook kind of spoiled the party for them--how is Microsoft going to convince people to use Vine when they're already twittering and status updating amongst the people they're connected to? Why would you try to go to a completely new community, and try to drag your friends to it when they're already on Facebook, Twitter, or a half dozen other social networking sites?

Unless Vine leverages some new way of allowing people to communicate to each other (ie like how Twitter came up with the concept of micro-blogging), I just don't see it taking off. I'll reserve judgement until I see the actual service...but it doesn't look good so far.
Posted by Phillip No comments:

Alright, so last posting on available internships, I promise. At least for now. ;)

We have two other opportunities available with Hob Nob, a Graphic Design Internship and PR Internship. Click on each one to read more details.

At least the good thing is that having internships means we're growing, right? This summer may prove to be crazy busy...but I'm really pumped about all the progress we'll be making!

Till next time, folks...

Posted by Phillip No comments:

Got another internship available for this summer, so here it is: we're looking for a bright computer science or computer engineering major to help architect our growing web presence.

Among other things, you'll be working on:
For more information, read here.
Posted by Phillip No comments:

Hob Nob is a company which aims to help individuals find their life callings.

Blogs I Read (when I have the time)

Phillip
Founder of a start-up trying to help people find their life callings.